skip to main | skip to sidebar

Save as Draft book review 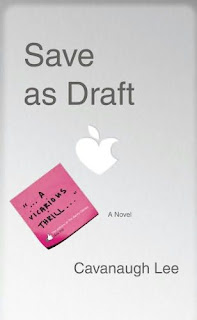 I recently received a review copy of Save as Draft, a delightful new novel by Cavanaugh Lee that traces the thoroughly modern dating and relationship life of Izabell, a wactress (waitress/actress) turned lawyer. The “hook” of this book is that it is comprised entirely of the texts, emails and tweets that Izabell and her friends send and receive.

The story begins with the eHarmony messages that Izabell receives about Martin (her “Match #6”) and Martin receives about Izabell (his “Match #137”). Alas, their promising romance will not immediately blossom, primarily because of Izabell’s growing fascination with her co-worker, Peter.

The telling of this story through emails and texts is both brilliant and frustrating. We all know that emails (and especially texts) have their pitfalls. Sure, they are instantaneous, but they lack the voice inflections of telephone calls and the context-rich nonverbal cues of face-to-face conversations. Because of this, Save as Draft is chatty and superficial. The characters hope, dream and fall in and out of love, but we (the readers) only get glimpses of their internal agonies and ecstasies.

The brilliance of the novel is in the emails that the characters write to each other but do not send. (These are “saved as draft,” which is where the title of the book is derived.) These unsent emails are the heartfelt communications that the characters SHOULD be sending. When Peter is falling for Izabell, he writes several “I love you” emails that he never sends. I wanted to slap him upside the head. Send the damn emails, you weenie! You’re not going to get the girl if she doesn’t know how you feel about her!

Save as Draft is a witty, well-written novel that provides valuable insight to the joys and pitfalls of dating in the internet age. It also serves as a warning for those of us who might rely too heavily on electronic forms of communication. In the humble opinion of this Middle-Aged Babe Magnet, texts and emails are best used as bridges between actual conversations. It’s too easy to misinterpret the sterile words on a computer screen or smart phone. That’s why emoticons and text shorthand (lol, omg) were developed to add meaning and emotion to cold, typed words.

I happen to be a big fan of technology. I am, after all, posting this on a blog—and I met my fiancée on match.com. I have first-hand knowledge of the value of using technology in dating and communicating. But when I have something important to say to my beloved, I want to gaze right into her beautiful eyes.
Posted by MiddleAgedBabeMagnet at 2:44 PM

MiddleAgedBabeMagnet
My name is Chad Stone. I am the author of Confessions of a Middle-Aged Babe Magnet, which is available as a printed paperback and an eBook on Amazon.com. The book is a humorous memoir that tells the story of my adventure into dating again in the 21st Century. It also serves as a self-help guide to dating for men. Sprinkled throughout the book are Babe Magnet Rules that provide insightful advice for single men of all ages. For women, the book offers a unique, unvarnished look into the mind of a real man—revealing how a single man thinks and why he behaves as he does. Fascinating, funny and heartfelt, Confessions of a Middle-Aged Babe Magnet is a triumph of the human spirit and proof that love is possible at any age— as long as you’re willing to embrace it.